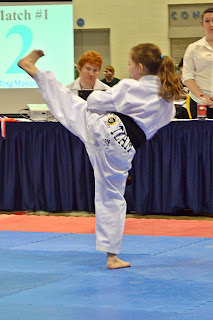 If you've been reading my homeschooling adventures for awhile, perhaps you'll remember me mentioning last year that we spent a little bit of time at this place.

Well, even from a distance, we've tried to remain connected and involved to our former martial arts school during our absence from Cleveland.

This past weekend, my daughter competed in the Lake Erie AAU Taekwondo National Qualifier in Akron, Ohio.  Several weeks ago she suggested that she compete.  It had been awhile since her last tournament, so I was surprised she had the idea.  However, once the idea was planted in her mind, she worked as hard as she could perfecting her competition form.

Her hard work paid off.  She walked away with two gold medals. 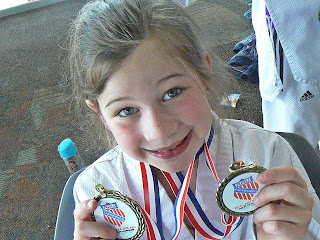