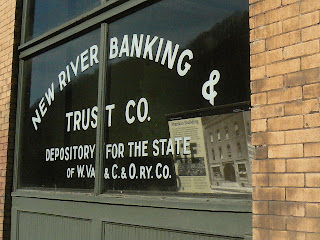 Thurmond is a town that sits directly on the New River in Fayette County with it's level land almost entirely consumed by CSX Railroad Operations (formerly the Chesapeake and Ohio Railway).  During the heyday of mining, Thurmond was a prosperous town with a number of businesses and facilities for the railway.  It's population for the 2010 census was five.  Today, much of Thurmond is owned by the National Park Service for the New River Gorge National River. The entire town is a designated historic district on the National Register of Historic Places, as well as one of Travel and Leisure's coolest ghost towns in America.

Our children loved visiting this 'real live ghost town' last weekend.  (They were constantly on the lookout for Scooby-Doo and the Mystery Machine).  Because of how desolate it is now, it is impossible to believe that it was once a town bustling with activity.  In fact, there is no main road that runs through the town.  There never has been.  Main Street is the tracks.  All the former businesses sit directly on the rail line, and the town and businesses were necessary when people traveled only by train.  It was a coal stop for steam engines.  The town began it's decline in the 1950s when most steam engines were replaced by diesel engines.

What we also found interesting were the houses that can be seen from the rail line.  Since they are National Park Service property, I believe they have been restored, painted and well-maintained on the outside for the visitors of this historic place.  However, upon closer inspection, they are most likely inhabited only by ghosts.

This town was well worth the visit for West Virginia history.  We can also check it off our Things-To-Do-While-Living-In-West-Virginia list. 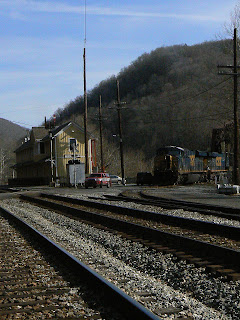 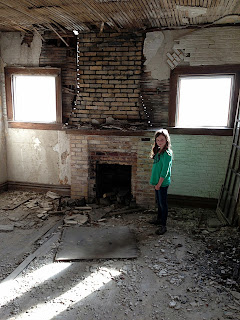