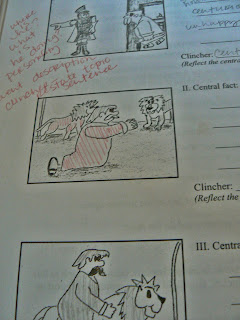 A recent IEW creative writing assignment that my son completed was 'Writing From Pictures'.  The student is given three pictures that tell a story.  His assignment was to write that story.  I loved his finished work from the pictures posted above, so I thought I'd share.  Enjoy!


One day for no apparent reason, a reprehensible Roman soldier came to my house threateningly telling me to advance to the lion pit. Now, I had been expecting this, so it was no surprise. “My good fellow,” I replied. “Allow me to get dressed.” While I was dressing, I prayed, hoping the ravenous lions would not devour me.

Leading me to the lion pit was Roman General Maximus. He was an evil soldier who despised anyone who prayed. Laughing and opening the gate he yelled, over the crowds' cheers, “Have fun!” I watched him move back up to his special-people-box. I prayed to myself, “Lord. Please have mercy.” Then I screamed at the top of my voice to the Romans. “RELEASE THE LIONS! I HAVE NO FEAR! I WILL NOT FALTER!”

Before you could say lion, I was standing face-to-face with the savage beast. Surprisingly, it didn't seem ravenous. In fact, it seemed like a lost, hungry puppy. Slowly reaching out my hand I touched the now cute animal. I could hear it softly purring. The Roman crowd started to boo. Ha! This stunned the Romans, as they saw their lion, who had not eaten in weeks, allowing the Praying-man to ride it. I was whom the Romans called the Praying-man. In front of their appalled faces, I proudly rode to my freedom on my lion, Fuzzy. Fuzzy was the only name he would answer to.

And, I lived happily ever after.