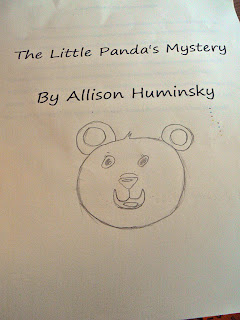 Last week, my daughter wanted to write a story about Pandas.  So I replied, "Go right ahead."  Enjoy.


Chapter One – The Mystery Begins
Once upon a time there was a panda named Bamboo who was six months old. He was as small as a big rock, and weighed 60 pounds. Since he loved to eat bamboo, that is why his parents, Mei Xing and Ting Ting, named him Bamboo.

One day he scampered outside searching for bamboo in the mini bamboo field. When he arrived, there was no bamboo. The grass was black and dry. “What a mystery,” he whispered to himself. He did not know what had happened. He was very scared. He clumsily staggered back home to tell his parents what had happened, but they were not there. He cautiously looked around the house, but it was destroyed.

Chapter Two – Finding Evidence
Finally Bamboo found his parents. They were asleep. He was still very frightened, because he thought they might be dead. He wanted to cry, but he knew he was too old to cry. His mom, Mei Xing, had always taught him to control his temper.

When his mom woke up she consoled him and happily hugged him with a great big bear hug. He was not sad anymore. He was happy. Then he told his mom about the mystery. She explained that farmers set fire to the pandas' field, because they were angry at the zoo keepers for planting bamboo on their crops.

Chapter Three – The Mystery Solved
“Then why was the house destroyed?” Bamboo wondered.

“The zoo keeper tried to give us our shots” Mei Xing answered. “So we ran around the house until we destroyed it. Does that solve your mystery?”
“Yes it does” agreed Bamboo.
Right then Ting Ting, his dad, woke up and sleepily mumbled, “Where is the bamboo flavored cake?”
Everyone laughed and lived happily ever after.