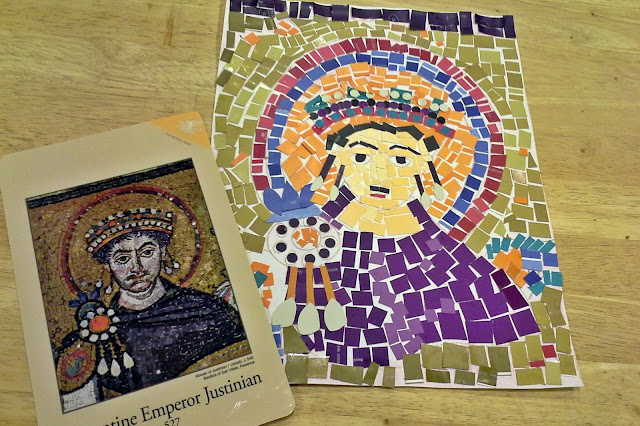 Week six of Middle Ages History had us researching Emperor Justinian, his wife Theodora, the Byzantine Empire, and the grand city of Constantinople.

Since the Byzantines were known for their elaborate mosaic art, my daughter and I opted to mosaic the great emperor.  My son compared and contrasted many of today's laws with Justinian's original code.  This is why I'm finding the class to be such a worthwhile investment.  As long as my children research the topic each week, I am confident we are learning.  We all do not need to complete the exact same research assignment every week.

In class, we defined Justinian: Justinian was a Byzantine emperor who was dedicated to rebuilding the Roman Empire and rewriting Roman law into his own code.

Some notable hashtags:
#straightouttabyzantium
#itwaslit [Constantinope, because of its notable beauty and activity, was the only city in the 6th century that was actually lit up at night.]
#obeythecode
#makeRomegreatagain
#feeltheburn [Greek fire was a weapon developed by the Byzantines.  Plus with these last two hashtags, know that we were smack dab in the middle of election season.]
Posted by Anne at 11:54 AM