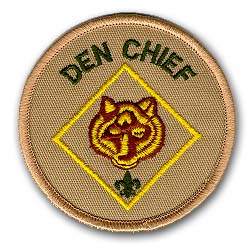 In September, our son was assigned a new Scouting role.  He is currently a Den Chief for a local Webelos troop.  Naturally, this adds quite a bit of responsibility to his Scouting resume, including attendance at two meetings a week.  [Any parent who has attempted to manage a teenager's Scout schedule will understand that fitting another weekly meeting into the mix is no easy feat.]

At first he was hesitant about the role, but he has come to truly enjoy it.  A Den Chief works alongside the Den Leader to help Cub Scouts advance through ranks, understand the purpose of Scouting, and become Boy Scouts upon their Cub Scout graduation. He won't admit it, but I believe he does look forward to the weekly Cub Scout meetings [probably more so than his own troop meetings.]
Posted by Anne at 10:22 AM