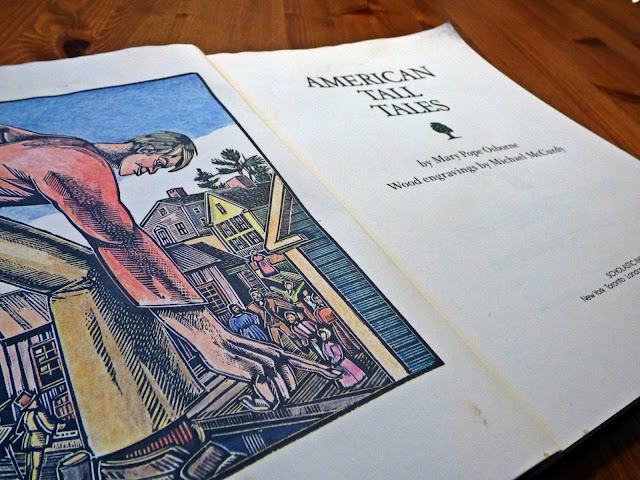 Earlier, I mentioned that my son has been taking an online writing course taught by Jennifer Trafton.  This has been an extraordinary experience.  For both of us.  Weekly, he has been assigned activities and assignments that have sparked his creativity and stretched his imagination.  Plus, he's even enjoyed the work a bit.  Last week, his assignment was to write a Tall Tale that included a larger-than-life character whose actions revealed  how something came to be.

This is why you take outside classes periodically.  I would have NEVER thought to assign him something that could be so fun.

Many years ago, I posted about Mary Pope Osborne's (of Magic Tree House fame) brilliant retellings of classic tales.  (Seriously, check out as many of these as you are able!)  When we were unpacking last summer, I left her American Tall Tales book within reach on a shelf.  I wasn't sure what we were going to do with it this year, but I did want my children to revisit it again.  Naturally, when my son received his assignment last week, I made him reread every single tale before writing his story.

His own Tall Tale told the story of a young, yet very wise, Native American boy with a pet buffalo.  The buffalo was the source of the boy's wisdom.  At one point in the story, the boy and his buffalo were separated from each other.  As the young boy frantically searched for his pet, his running formed the boundaries of many of the western states.

My son was proud of his work.  I learned to keep trying new things.  And keep reading more books.
Posted by Anne at 7:59 PM