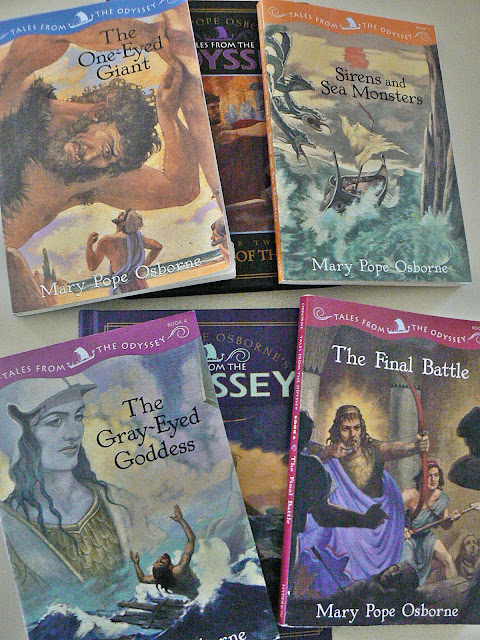 During my first year of homeschooling, I discovered that Mary Pope Osborne (author of the Magic Tree House books) had published many more books than just her best-selling series, of which we had always been huge fans.  For older children, she has retold Greek mythology, Norse mythology, medieval stories, mermaid tales, American tall tales, the life of Christ, and a series based on Homer’s Odyssey.  We have read all of the above, and I highly recommend each one.

One thing I wanted to accomplish as a homeschooler was introducing my children to the Classics early on.  We began with picture books, then early readers, then abridged versions, etc.  I wanted them to know the stories, so that when they began to really study the works (in high school and/or college), the stories would come alive and make even more sense.  I wonder how much more I would have enjoyed Literature had I known the story of Oliver Twist or Romeo and Juliet before high school.  With my children, I always try to study the related Literature along with the period of History we are studying at the time.

Since we are studying Ancient History this year, we read Mary Pope Osborne's Odyssey tale.  My children love this story.  This is the second time we've studied Ancient History and therefore the second time we've read through various versions of the Odyssey, as well as the Iliad and other Greek myths. I have to admit, I think the children's versions, with detailed illustrations, are quite enjoyable!
Posted by Anne at 2:59 PM