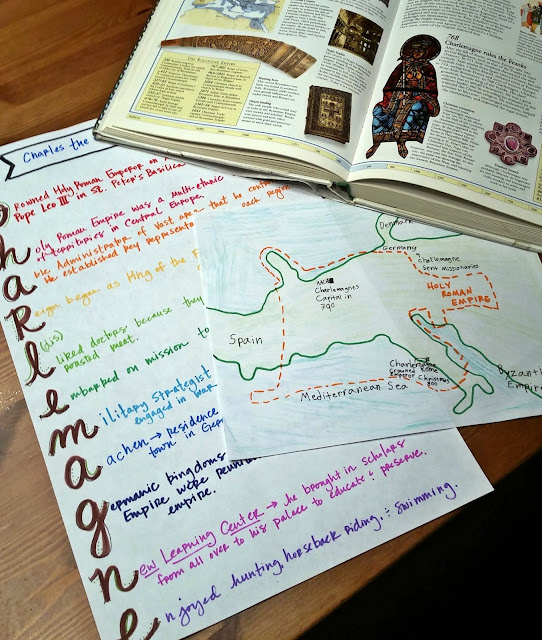 In our Middle Ages History class, we studied Charlemagne on week 9.  We're now on week 23.  It's difficult to post about something that happened over three months ago, but I'm committed to at least documenting this journey in case I ever want to facilitate the class again.

Charlemagne became King of the Franks when he was only 26 years old.  He was an able administrator which is why is the empire expanded under his reign.  He served as inspiration for such leaders as Bonaparte and Hitler who envisioned ruling a unified Europe.

In class, we defined Charlemagne as: Charlemagne was a Frankish King who was crowned Holy Roman Emperor of Europe in 800 AD.  He desired advancement in Christianity and education.

Some notable hashtags:
#makeEuropemagnusagain
#lowercase (His educational reforms during the Carolingian Renaissance introduced the lower case alphabet that we have today.)
#spellmyname (Charlemagne could read, but not write.  His hands were too battered from wars.)
Posted by Anne at 11:30 AM