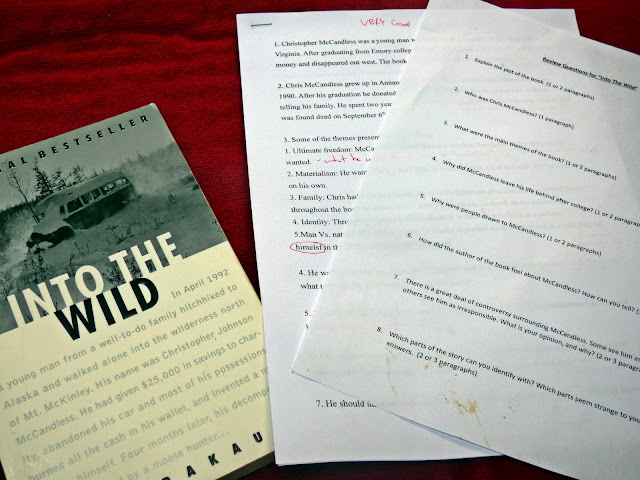 I am eager to begin sharing with you the literature we are using this year with our son (who turned 15 on Monday).  My husband, an avid reader, is tackling this subject along with me, and we are piecing together a list of books, essays, speeches, etc. that we believe every young man should read and reflect upon.  First on that list was Jon Krakauer's Into the Wild.

If you are unfamiliar with the book, Krakauer expands on an article he penned for Outside magazine about the life and death of Christopher McCandless.  In May of 1990, McCandless disappeared in the western United States after graduating from Emory University.  After a 28-month journey, McCandless was found dead inside an abandoned bus in Alaska.  The author attempts to retrace McCandless steps to tell his story.  Sean Penn adapted the book into a film in 2007.

It really is a fascinating story, and McCandless' legacy remains polarizing.  Some see him as an inspirational figure whereas others (Alaskans especially) see him as tragically irresponsible.  These were great issues to unpackage with our son.
Posted by Anne at 2:41 PM