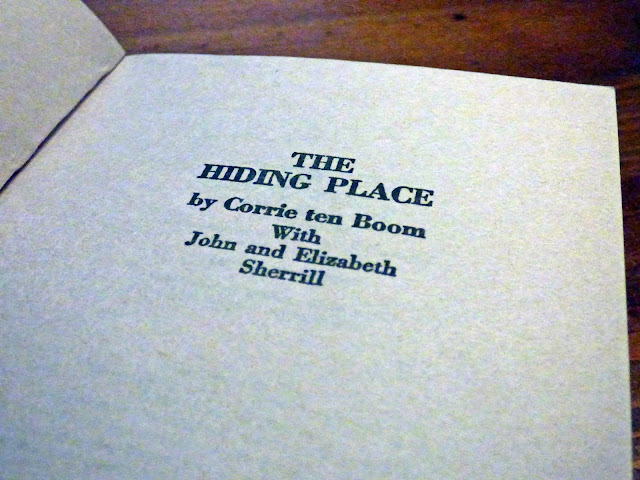 Looking back over our fall happenings, I was surprised to see I never posted about The Hiding Place.

If you are unfamiliar, The Hiding Place is the true story of Corrie Ten Boom, a Dutch Christian woman, who (along with her family) helped approximately 800 Jews escape the Holocaust.  I remember this book being a popular read when I was in college, yet I never opened the book until recently.

The Hiding Place was another literary assignment for my son this fall.  I read the book alongside him, and I am so glad that I did.  It is spectacular.  It paints an incredible picture of Nazi occupied Holland during the Second World War, as well as the Ten Booms incredible faith.  It is a reminder that our 2015 daily circumstantial struggles truly pale in comparison to many pioneers of the faith.

Early in the story, after the Germans occupied Holland, the Dutch were ordered to turn in all private radios.  The Ten Booms secretly stashed one of their radios beneath a curve in their staircase.  Corrie Ten Boom told her first conscious lie to a German army clerk when she turned in only one of the family's radios, claiming the family hadn't any others.  My son wrote his persuasive essay (more of an ethics paper really) on whether or not it was appropriate for Corrie to lie in this situation.

Is it ever appropriate to lie?  How about to those in authority?  Just like in day-to-day life, we witness in the book how this lie turns into many more lies as the cycle of dishonesty continues.  Yet the Ten Booms were a family of integrity who displayed to others that they were trustworthy.  And this one lie went on to save the lives of many others.  Etc.

Great book.  And even greater conversations to be had with a maturing 14-year-old.
Posted by Anne at 10:17 AM