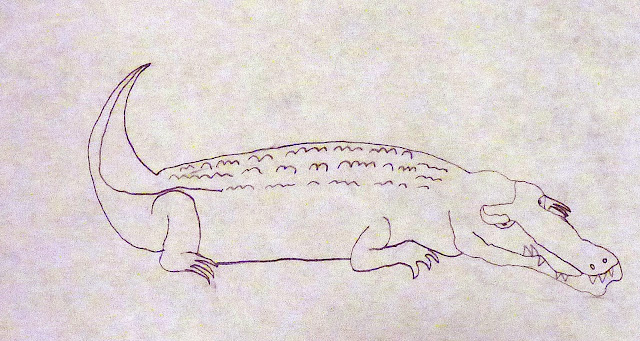 Retelling Narrative Stories is one of our favorite IEW units.  A student is given a story that s/he is already familiar with.  The assignment is to 'retell' the story using many of the writing skills and techniques the child has learned.  My children and I have completed this assignment with many familiar short stories over the years.

Last week, my daughter penned this tale.  It is originally Aesop's fable, The Lion and the Mouse.  The animals were changed to reflect an Ancient Egypt setting.  You will see that the conflict and resolution of the story remain the same.


Long, long ago on a scorching, muggy afternoon in Ancient Egypt, the land surrounding the Nile River was buzzing with activity. However, in the water was a lone, horrifying, dangerous crocodile who was named Skittles. No creature dared enter the water because of vicious Skittles.

On the bank, hopping along, hunting for flies and minding his own business was a sweet, helpful toad named Toady. Eyeing the juicy toad, Skittles feriously snatched him off the bank. “Please spare me,” Toady beggingly pleaded with the savage beast. “I promise. If you let me live, I will help you one day.”

Skittles chuckled at Toady's absurdity. “How could you, a tiny, tempting toad, possibly assist the King of the Reptiles?' But at that moment, Skittles became distracted by a larger meal, so Toady hurriedly escaped.

Sure enough, several days later, Toady heard the most deafening moaning and groaning. “Aaaaaahhhhhh!” wailed Skittles. “My tooth! I'm in agony. And, my insurance doesn't offer a dental plan.”


Frightened yet fearless, the tiny toad confidently hopped toward the crocodile. In a trembling voice, Toady asked Skittles to open wide. Praying to the amphibian gods of the ancient Nile, Toady lassoed his tongue around Skittles cracked tooth, and quickly extracted it.

Skittles heaved a sigh of relief and gratefully remarked, “I am so glad you kept your promise. Now we can be BFFs.”

As Toady hopped away into the Nile reeds, Skittles yelled, “See you later, Toad.”

Toady cheerfully replied, “After while, Crocodile.”
Posted by Anne at 3:01 PM