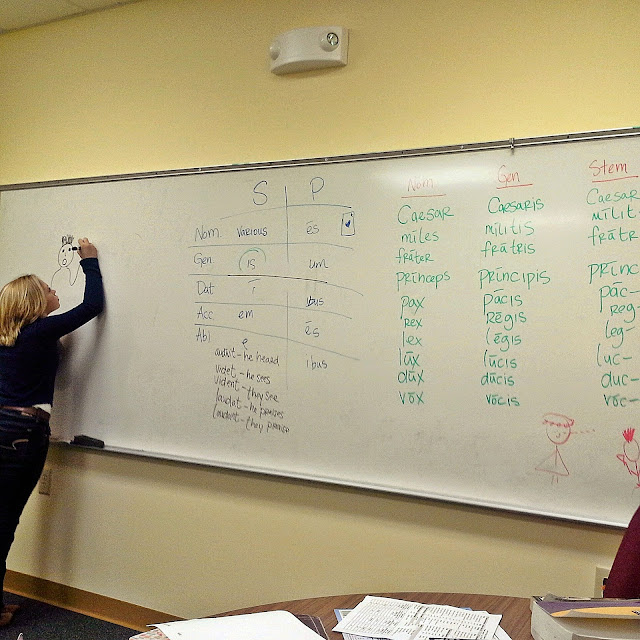 Almost every week, in my Challenge A class, we play Pictionary to review Latin.  My students enjoy it. (Or, at least they pretend to enjoy it, which is why I keep returning to it every week.)

Basically, we review by listing a bunch of Latin nouns, and their stems, on the board.  Then, we identify a few verbs that we have learned.  The verbs allow this to be a simple, manageable activity.  (We are limited in our sentence construction due to the fact we've learned only a few verbs.)  Finally, I have the students take turns drawing a picture that enables us to write a sentence in English, then parse it, and attempt to translate it into Latin.

Yesterday, we were working with the verbs heard, sees, and praises along with some 3rd Declension nouns. Normally, our sentences are very basic and read Subject-Verb-Object, which is a great starting point for these 13-year-old students to master two different noun cases.  Occasionally, I will tell them to add a possessive, or a prepositional phrase (telling us where this event happened) in order to incorporate two more noun cases.  If we use the verb gives, we are able to incorporate the Dative noun case, also.  Yesterday, some of our sentences read: Caesar praises peace.  The king praises the law.  Caesar praises the soldier.  The soldier sees the light.  Caesar heard the soldier's voice.

Our Henle text book loves to give us examples of the conquest of the Romans, so oftentimes I will use exercises out of the book for entertainment.  13-year-olds love to draw pictures of soldiers attacking, or swords being handed off, or dead bodies floating in the river!! 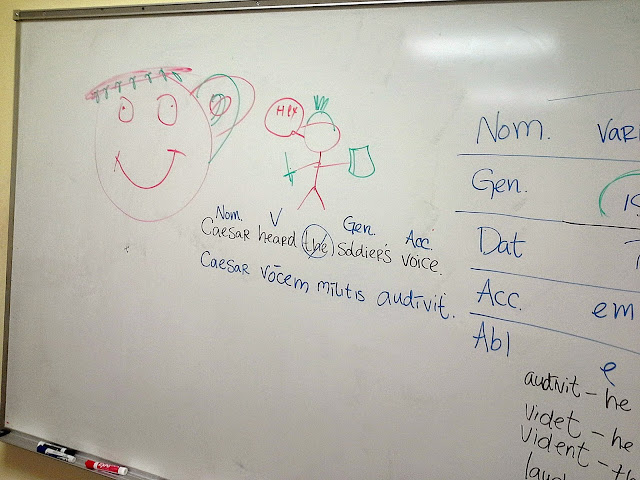