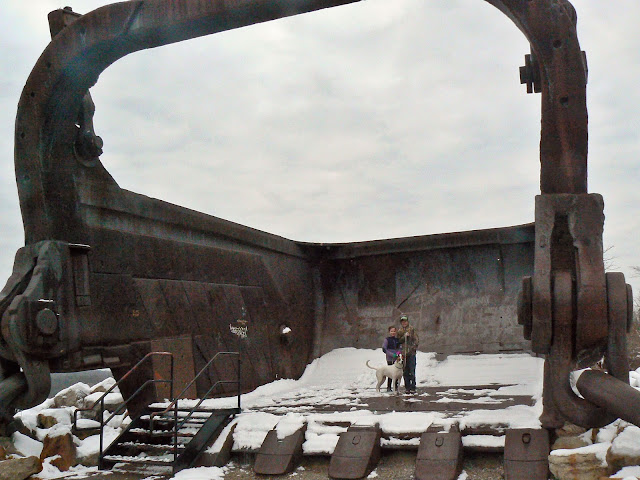 The Big Muskie was a coal mining dragline operated by the Central Ohio Coal Company beginning in 1969.  Notably, it was the largest single-bucket digging machine ever created and one of the world's largest mobile earth-moving machines. While in operation, the huge machine was capable of taking a 320 ton bite of earth from one location, pivoting, and then depositing it some 600 feet away.  Due to environmental regulations and increased operating costs, the Big Muskie was removed from service in 1991 and the machine was broken down in 1999.

However, as a tribute to Ohio Miners and the immense machine, the Big Muskie bucket can be viewed at the Miner's Memorial Park in southeastern Ohio.  To continue with our mining education, we made a quick stop at the park on Thanksgiving Day.  Above you will see my children standing in the bucket of the machine.  The bucket alone weighs 460,000 pounds!!  Two Greyhound buses can fit inside it.  Below you can see a picture of how big the actual machine was during its operation when you see how small the bucket is in comparison. 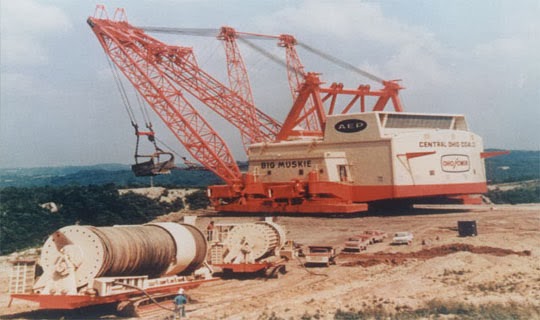 What disappoints my husband the most (now that he's a coal miner) is that we lived a mere 30 miles from the entire machine while it sat inoperable for 8 years.  We could have seen it in its entirety at anytime.
Posted by Anne at 7:40 PM