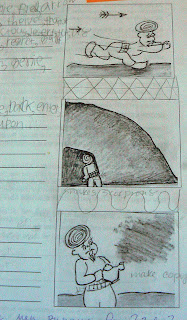 One of the IEW creative writing units that we revisit each year is appropriately titled Writing From Pictures.  (You can read my post last year here).  This year, both my children completed the assignment, and I love their finished works.  What I found interesting is that they both came up with a similar theme (the man had stolen food from a market) even though they worked on the assignment separately.  I also enjoyed that they both added some humor into their papers.  I'm positive that I did not know that writing could be funny, nor how to make it funny, when I was almost 10 and 12.

Here is my daughter's paper.  You can see my son's paper on the Day 31 post.

That Apple
Once upon a time there was a young vagrant named Aladdin. One sunny afternoon, he was walking in the market and saw a beautiful, juicy apple for sale. He had no money. He could not resist. He had to take a bite. Right as the apple touched his mouth, a feisty ferret jumped out from behind the market place cart. This ferret made a very strange noise. “Snarf, snarf, snarf, snarf!” he squeaked while waving his finger at Aladdin. Immediately, this feisty ferret whipped out a bow and arrow and began shooting at this young vagrant.
To get away from the ferret, Aladdin left the market place with the apple, sprinting at top speeds into the scorching hot desert. As he entered the desert, his speed began to decrease because of the weight of the hot weather. He trudged along until he stumbled upon a cave. “Oh. What's this?” he thought to himself. Quickly he bolted into the cave to escape the arrows and the desert heat.

Once inside the cave, Aladdin saw a massive golden podium surrounded with multi-colored, sparkling gems. Sitting of top of this podium was a fairly small golden lamp. “I better not let my curiousity get the better of me” he thought to himself. He tried to count to ten, but just like with the apple, he could not resist and wound up grabbing the lamp around count eight. As he snatched the lamp from the podium, glowing sparks began to explode from this treasure. In amazement, the lamp firmly attached itself to Aladdin's hands. Out of the top of the lamp, another ferret appeared. Instead of a bow and arrows, this one was wearing a genie hat.
“Thank you for freeing me from this lamp!” the ferret excitedly exclaimed. “I will now grant you one wish.”

“Before I wish for anything,” Aladdin responded, “would you remove this thing from my hands?”

“Awwwww, man!!” Aladdin mumbled to himself with his hands still stuck to the lamp. “I really wanted that apple.”
Posted by Anne at 9:17 AM