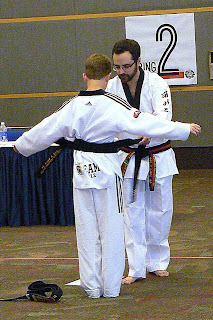 There is a popular saying in the martial arts world that states:  A Black Belt is just a White Belt that never quit (or never gave up).

On Saturday, our son tested for his Third Degree Black Belt in Taekwondo.  To achieve this rank, and be eligible for his test, he needed to be practicing martial arts consistently for a minimum of six years.  He needed to demonstrate to the judges that he was ready for this rank by his skills in traditional Taekwondo forms, Olympic style sparring techniques, and board breaking.  His test was rigorous, but by the end of his exam he displayed his competency and understanding with Taekwondo concepts and the ability to use them.  His new rank does not indicate that he is an expert in the sport or mark the end of his training.  It does, however, begin his journey to advanced learning.  This excites and encourages him.

For fun, I pulled up a picture of one of his first ever belt tests! 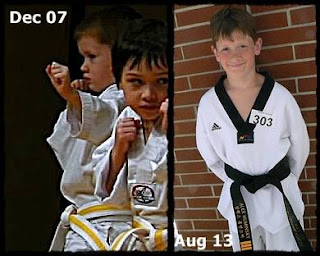