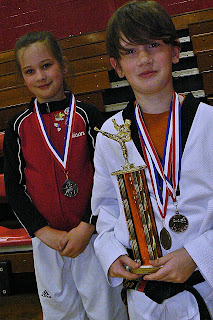 On Saturday my children competed in the United Martial Arts Tournament Alliance's Spring Show Down in Oak Hill, West Virginia.  As you may remember, competitive Taekwondo is not new to my children, but embracing a new style of martial arts and walking into an unfamiliar and unknown tournament can be ridiculously overwhelming and nerve-wracking.  Even for the parents.  I am unbelievably proud, not only of their performance, but of their courage and willingness to try something new.

My son and I began taking martial arts classes at Family Martial Arts about 3 months ago.  Some of our previous training overlaps quite well and other techniques are brand new.  We've enjoyed being students at a different school, learning new skills and refining others.  They have been very gracious with us as they've respected our rank and experience from a different martial arts style and school.  When we first heard about the spring tournament they were hosting, we planned on attending just to get an idea of how their tournaments function and have some expectations for the future. But, our son decided a few weeks ago that he'd like to compete.  Then, at the last minute my daughter (who isn't even enrolled in their classes) decided she'd like to, also.

They were nervous and unfamiliar with some tournament rules (which wound up costing them some points), but even so my daughter took home a silver medal in her Forms division, and my son won gold in his Sparring division and bronze in his Forms division.  Funny story -- he tied for silver, but was unaware of the procedure to break a tie, so wound up in third place.  Lesson learned, and he knows for next time.