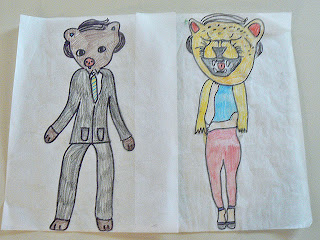 My children studied Domenikos Theotokopoulos (can you pronounce that?) also known as El Greco (1541-1614) this week.  He was known for drawing tall, solemn figures that appeared to be stretched out.  Their related assignment was to draw an elongated person by tracing cut up pictures out of magazines.

My daughter, doing what she often does with her art projects, decided this could be taken to the next level.  She began mixing figures together with parts from several animals and people.  This has kept her busy for a few days, and she has quite the collection.  Pictured are two of my favorites.  I asked her what she wanted to title this post and she said, "Animal People".
Posted by Anne at 7:41 PM