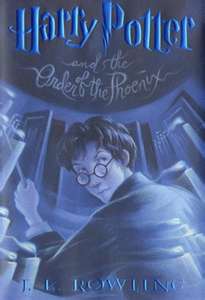 Well, I've finally finished the 5th year at Hogwarts.  I say 'I've', not 'we've', because my daughter went ahead and finished it on her own about 12 weeks ago.  She's nearly done with book 6.  She began moving faster than I could keep up, which was my goal in reading this series to begin with.  I did enjoy Order of the Phoenix, but not as much as some of the others.  I appreciate how the characters are developing as well as the introduction of several new characters.  I'm looking forward to the Half-Blood Prince....

"I feel I owe you another explanation, Harry," said Dumbledore hesitantly.  "You may, perhaps, have wondered why I never chose you as a prefect?  I must confess...that I rather thought...you had enough responsibility to be going on with."
Posted by Anne at 11:56 AM