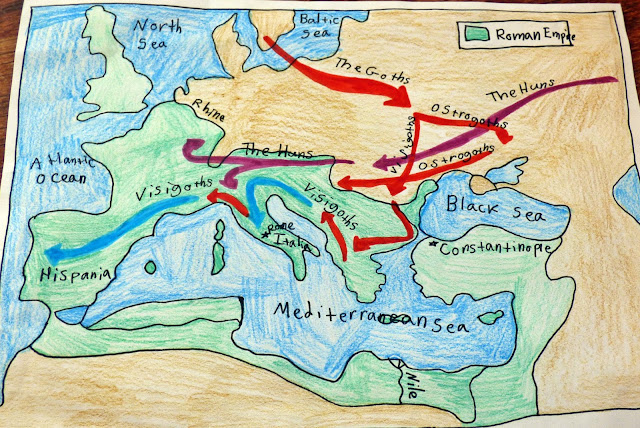 Week four of Middle Ages History had us researching Germanic tribes, their barbarian customs, and their devastating conquest of the Roman Empire.

Side Note -- Week four was actually the first week of October.  I had every intention to 'catch up' on my blog last weekend, but our sole North Carolina winter storm left us without power all day on Saturday.

For at home study, my children and I watched several videos on different Germanic tribes and drew multiple maps.  Once you draw a map of the Roman Empire, you will never forget its boundaries.

In class, we defined Barbarians as: Barbarians were 5th century warriors from the Germanic and Asiatic regions who were fighting for control of the Roman Empire.

Until this point, the Roman Empire had not fallen to a foreign enemy in almost 800 years.  St. Jerome was living in a cave in Bethlehem when he heard the news that King Alaric of the Visigoths had overthrown Rome.  He lamented:

My voice sticks in my throat; and, as I dictate, sobs choke my utterance.  The City which had taken the world was itself taken.  - 410 AD
Posted by Anne at 1:00 PM