If you're a mother, you've definitely asked other mothers how they organize mealtimes.  Even more so if you're a homeschooler.  One of the fallacies (I believe) about homeschooling mothers is because we spend most of our day at home, probably standing up in the kitchen, we should produce a dinner meal rather effortlessly.  It only a takes a few weeks into your homeschooling journey before you realize how difficult it is to manage dinner after spending a day educating multiple children.  Since my theme this year is simplicity, I thought I would post how I've learned how to simplify our mealtime over the past seven years.

The real secret to my success is for about 9 - 10 weeks at a time, we have the same thing for dinner on the same night of the week, every week.  That's it. So, if we're having tacos on Tuesdays, we're going to continue to have tacos on Tuesdays, every week, until everyone gets tired of eating tacos on Tuesdays (which I've discovered is roughly 9 - 10 weeks).  The truth is, I can only make about 20 recipes really well.  And of those 20 recipes, about 7 - 10 of them are my family's favorites.  By rotating their favorite meals, everyone eats, everyone is satisfied, and mom really doesn't have to work all that hard.

This simplifies my life in two ways.  First, and most importantly, I can usually get everything I need at the store in less than an hour, once a week.  I know exactly what I need for these recipes, and I know the exact location of the items in the store.  The second part of that sentence is what saves me all kinds of time. I try to shop once a week always at the same store, on Sunday, with my husband.  I can breeze in and out of the store because on previous trips I have already located what I need.  Usually I keep the same hand-written grocery list for multiple weeks.  I indicate on the list what I need, or what I'm stocked up on for that trip to the store.  (Someone more organized than me could easily type up a master list with boxes to check and print it off each week.)  Preparing in this way also helps us to follow a pretty conservative food budget. 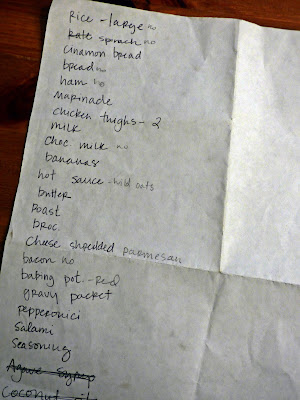 Secondly, when my children know what to expect, they are able to learn and to usefully assist me in the kitchen.  My children aren't going to learn long division by watching me solve a problem once or twice.  They need repetition and practice.  They need to see it modeled.  Similarly, they aren't going to learn how to make a lasagna by watching me fix one once.  In the kitchen, they still need repetition, practice, and modeling.  By fixing the same meals repeatedly, while my children watch, learn, and assist, I have confidence that when they move out of our home they'll be able to survive a few weeks without resorting to a dollar menu.

I plan meals for Monday through Friday.  One weekend meal we will usually eat out and for another weekend meal I might try out a new recipe for a future meal plan.  There are usually plenty of left overs for lunches throughout the week and even on the weekend.

My recipes are incredibly simple -- whole foods usually with four ingredients or less, often in one pan to minimize clean-up.  I've always enjoyed simple recipes, but even more so as I embrace simplicity as a theme this year.  Like many others, I like to use the crock pot, so that meal prep and most clean up is complete before my children even stumble out of bed in the mornings.  Here is a look at what we're having this winter.  Disclaimer: Try as I might, I'm still not a food photographer! 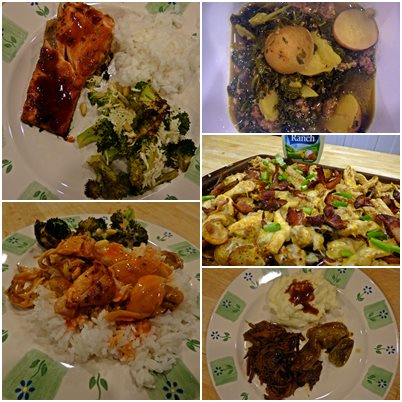 On Mondays we have salmon.  Actually, the salmon is the one thing I don't buy at the grocery store over the weekend, but purchase from a market on Monday mornings.  I marinate it in a bottled Caribbean sauce throughout the day, and then bake it for about 20 minutes.  It's often everyone's favorite meal with little to no left overs.  Along with steamed rice, I toss broccoli in olive oil and seasoning salt and roast in the oven for about 25 minutes.  For the last five minutes, I sprinkle Parmesan cheese and pine nuts on top of the vegetables.  Sometimes instead of broccoli, this shows up as cauliflower.  Sometimes both.

On Tuesday mornings I throw kale, small potatoes, cooked ground sausage, and chicken broth in the crock pot with salt and a little red pepper.  Voila.

Wednesday's meal is also a crowd-pleaser -- very similar to loaded fries you would order at a restaurant.  I roast potatoes in olive oil and seasoning salt for about 20 minutes.  Then, in the same pan, I top the potatoes with boneless chicken thighs and hot sauce.  I bake this until the chicken is cooked through. The deliciousness comes from the potatoes cooking in the grease from the chicken.  Then, I sprinkle with cheese, let that melt, and top with cooked bacon and green onions.  If you're not watching your calories, this can also be topped with ranch dressing or sour cream.

On Thursdays, I make Mississippi Roast.  Have you ever had this?  It is superb, yet an incredibly simple crock pot meal, and the recipe can be found here.  (Plus this gal is a food photographer, so her pictures are far better than mine.)  I discovered this recipe about eighteen months ago, and we have eaten this once a week since then.  I make it on Thursdays because that is the one day we are out of the house.  This takes so little effort that I can have the roast fully prepared and cooking in less time than it takes to brew a cup of coffee.  Left overs are perfect served on buns for sliders.

Because this is so blasted simple, I spend the most amount of time on Thursdays making actual mashed potatoes (with butter, cream cheese, and heavy whipping cream.  Yum!)  My 14-year-old son has a New Year's goal unlike many others -- he's hoping to gain 40 pounds in the next eight months.  He will eat mashed potatoes by the potful, so on Thursdays I make that happen.  As a result, I wind up with a few more dishes at the end of the day.

Fridays look similar to Monday, although I grill boneless chicken thighs in wing sauce and serve on steamed rice with the same broccoli side.  This meal is also a hit, and we've eaten it regularly over the past six years!

Benjamin Franklin stated:  By failing to prepare, you are preparing to fail.  It's amazing how a workable meal plan simplifies my homeschooling journey.  And as a result, makes the journey that much more enjoyable.
Posted by Anne at 9:47 AM