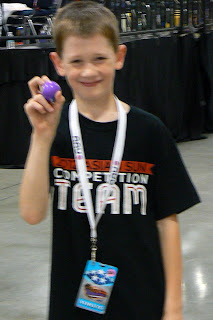 To be honest, this blog was on somewhat of a hiatus this summer, because I was trying to figure out how to pen this post.  I've noticed that this blog has become a display of accomplishments, which for the most part I'm fine with, because I do want to 'show off' what we've done and what we've accomplished through our home education experiences.  But, part of life, and learning, is responding to disappointment, and embarrassment, and failure.  To leave that out would be leaving out an entire element of the learning process.  So, I have a disappointment to share.  A big one.

The first week of July we traveled to Ft. Lauderdale, Florida, so my son could compete in the AAU Taekwondo National Championships.  He had been looking forward to this tournament since he competed in it the previous summer.  We arranged our school year (and life) around this tournament, because it was 'the one thing' he wanted to do all year.  He practiced.  He trained.  He prepared.  He qualified for the tournament.  He took instruction.  He practiced and trained and prepared some more.  We delayed our move for this tournament.  The month prior to the tournament he eliminated all sugar from his diet, so he could make his weight division.  He lost four pounds.  He's ten.  I never had to make him attend a class or a practice.  He was motivated and determined.  We could not have been more proud.

His division fought on the last day of the tournament.  For two days we watched his teammates, friends, and coaches win.  It was exciting.  He was getting even more motivated.  We could not wait to see him compete.  Our prayer for him the morning of his competition was, "God lead him to victory.  If not, we ask that it will be a character building experience."  The second part of that prayer was answered.

I'm sure you can see where this story is going, and I won't drag it out any further.  He lost got destroyed in his first round.  Honestly, we didn't expect him to win, but we thought that he would last more than one round.  He was ill-prepared for his division (it was almost TEN times bigger than his 2011 division) and the competitors were older (10/11 vs. 8/9 the year before).  He became extremely nervous and froze as soon as he got in the ring.  For all his months of practice and preparation, he didn't do one thing he was coached or trained to do.  As soon as it ended, it was one of those moments where I thought: Can't we just hit the rewind button on life and make the last few minutes turn out differently?  As we shared in his pain, it was disappointing, sad, humiliating, and embarrassing for all of us.

Our prayer was answered, not only for our son, but also for us.  As we stood there in the midst of disappointment and loss, we realized our attitudes, actions, and responses would affect his.  Would we blame someone else or some other situation for the loss (rather than having him own it himself)?  Would we say, hang up your belt and never participate in taekwondo again?  Would we tell him, just move on and don't be disappointed?  Would we say, you deserved to win (even though he clearly didn't)?  Would we claim something about this wasn't fair (one of our least favorite phrases)?

Naturally, character building is a process and doesn't happen overnight.  G. K. Chesteron has a quote that reads, How you think when you lose determines how long it will be until you win.  Since my son is only ten, I'm not sure he has right thinking on any subject (do any of us?).  However, as we've helped him to process through this, we've heard him say phrases like, 'You can't compete, if you're not prepared to lose', or 'A loss doesn't define your career'.  Perhaps they're just catch phrases he's grabbed from Sports Illustrated for Kids, but nonetheless, it reveals to us that his character building is in process.

One last thought before I sign off this rather lengthy post.  Upon his loss, we all felt like bursting into tears.  To keep my husband from doing so, he left the Convention Center and walked several miles around Ft. Lauderdale.  While walking, he found on a sidewalk the giant purple superball in the photo above.  Our son loves superballs and can entertain himself for hours with one.  It seemed like quite the Divine gift that day and helped us all to remember that life is much bigger than one taekwondo loss.
Posted by Anne at 1:17 PM