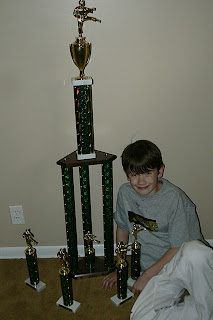 My son has been gunning for one of these trophies for the past two years.  Well, I'm happy to say that Saturday was his day.  He took first in all four events, and was the only Black Belt at the tournament to do so.  As a result, he won the Grand Champion trophy for the Black Belt division.  Above you see him proudly displaying not only his grand champ trophy, but also his four first place awards!
Posted by Anne at 10:18 PM