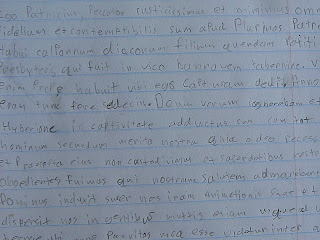 Two Latin letters survive which are generally accepted to have been written by St. Patrick.  One is his Declaration (in Latin, Confessio).  To celebrate the holiday we read through part of it in Latin.  Then, my son copied the first part in Latin for his copy work.  The above reads:

I, Patrick, a sinner, a most simple countryman, the least of all the faithful and most contemptible to many, had for father the deacon Calpurnius, son of the late Potitus, a priest, of the settlement of Bannavem Taburniae; he had a small villa nearby where I was taken captive.  I was at that time about sixteen years of age.  I did not, indeed, know the true God; and I was taken into captivity in Ireland with many thousands of people, according to our merits, because we were away from God, we did not keep his precepts, nor were we obedient to our priests who used to remind us of our salvation.  And the Lord brought down on us the fury of his being and scattered us among many nations, even to the ends of the earth, where I, in my smallness, am now to be found among foreigners.
Posted by Anne at 12:51 PM