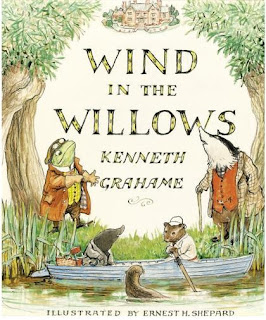 My husband has been reading The Wind in the Willows to our children.  The other evening, after reading to them, he said to me, "Whatever you are doing with them, it must be something right!"  He shared with me the following story...

We read the chapter "Wayfarers All", in which the Water Rat, near the end of summer, begins to lament that many of his friends will be going South for the Winter. He asks some sparrows why they don't stay through the winter, which has its charms and beauties as well as its hardships. They reply that they would love to, but they always feel such a mysterious pull to go South, and that pull must be obeyed. After some time in the South, they always feel the pull to return Home, and so they do, each Spring.

As the Water Rat is reflecting on these thoughts, he meets the Seafarer Rat, who is traveling along the road near Water Rat's home. Seafarer Rat has tried to settle down on a nearby farm, but the South and strange distant lands call to him, and he is going back to his wandering life. He regales Water Rat with hours of tales of adventure, and strange foods, and sea songs, and stories of faraway places and friends. Water Rat is totally transfixed, and heads home to pack his bags - the South is calling him, too.

As he is leaving his house with bags packed, he runs into his housemate, Mole, returning home. Mole sees what Water Rat is doing, and pushes him back inside, shuts the door, and guides Water Rat over to a chair. Water Rat breaks down and sobs hysterically, delirious with confusion and exhaustion. Eventually, Water Rat falls asleep. Hours later, when he awakens, Mole begins talking about all the fat, ripe apples that will soon be harvested, all the sheaves of grain that will soon be brought in for baking bread, the crispness of the air as the seasons change, the roaring fires on cold days just right for smoking pipes and telling stories. Water Rat has calmed down, but is still somewhat sad, and moves over to his desk to write some poetry.

I asked the kids what they thought the author was trying to convey with this story. Without hesitation my son said, "Don't try to live somebody else's life."