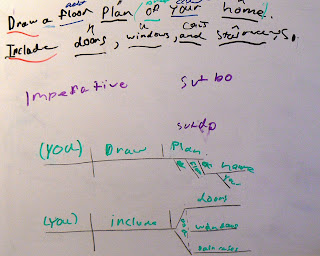 My son and I have been working hard this school year learning to diagram sentences.  We've reached some peaks and valleys during our attempts, but the mountain we are climbing has become much easier!  Either that, or now we are better trained to tackle it.  Several weeks ago I posted a quote from a homeschooler that read, 'Don't think of yourself as the teacher, think of yourself as the leading learner'.  Nothing could be more true when it comes to myself and sentence diagramming.  I do have some vague memories of diagramming sentences when I was in junior high, but I have no recollection of what I learned or how it was done.  As we've begun this journey, I realized that diagramming sentences is extremely useful to us.  Both my son and I are visual learners, and diagramming has become an important tool for us in order to see how our language works and how the parts fit together.  It is very formulaic and has a real intellectual challenge, which we both enjoy.  We're still early on in the process (I envision us diagramming sentences for several years before it becomes second nature), but our progress has been encouraging thus far.

I've also mentioned before that I don't use many textbooks (or worksheets), so we've learned to diagram with minimal resources, which I think has aided us.  The strong benefit has been taking sentences that we see, read, or use regularly and attempting to diagram them.  Plus, since I don't have the answer sheet in front of me, I need to pay attention and learn too.  I have started calling this our 'Diagrams of the Day', and I believe this has made the assignment come alive for my son.  I've dictated sentences to my son from all sorts of sources and texts (Harry Potter books, Nutcracker books, history assignments, Christmas cards, etc.).  Then, after checking his written sentence for spelling and mechanics (capitalization, end mark, etc.), we ask ourselves a series of questions to reveal and label the role of each word in the sentence.  Following that we are able to discover the structure of the sentence, the purpose of the sentence, and the diagramming pattern that fits that particular sentence.

Our sentences for today are pictured above.  They came from my son's Cub Scout Webelo's Handbook.  He wrote the sentences on the white board as I read them to him.  Then, he marked the words using a color coding system to identify the parts of speech (red = verb, green parenthesis around prepositional phrase, etc.). Next, we identified the subject and verb of the sentence.  In the sentences above the subject is an understood you since the sentences are giving a command.  We asked the question 'what?' after the verb to discover that the nouns in the predicate part of the sentence are direct objects.  This then makes the verbs transitive since they are 'transferring' the action from the subject to the object of the sentence.  At this point we are able to discover any other words in the sentence being used as modifiers.  The purple ink in the photo shows where he identified the sentence structure (simple - somehow this didn't make it into the photo), the sentence purpose (imperative, because it is giving a command) and the sentence pattern (subject - verb transitive - direct object).  Then he finished with setting up the basic diagramming format.

It may seem like a lot, but it really is a very simple task that only takes us a few minutes a day.  I'm certainly no expert, but even this morning I realized that it is beneficial to sort through something like this daily.  We had several days off of diagramming for a Christmas break, and like with anything else, to begin again is more difficult than had we continued on in the first place.
Posted by Anne at 5:33 PM