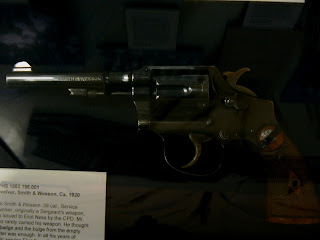 Before this week, I was unaware that Cleveland even had a police museum.  On Wednesday, we visited the museum with my son's boy scout troop.  We loved it!  This law enforcement museum is free and open to the public year round and definitely worth the visit.

One highlight from our recent tour included a history of Cleveland's organized crime.  There was a replica of the car door bomb that killed legendary mob boss Danny Greene in 1977. Naturally, there was an Eliot Ness collection, and pictured above is his 1920 Smith and Wesson.  Ness arrived in Cleveland in 1935, and at that time Cleveland was regarded as the most dangerous city in the country.

My children's two favorite exhibits were the jail cell that they could lock each other in (of course!) and the display of confiscated weapons, including a fully functional home-made shotgun constructed from galvanized pipe and pipe fitting!
Posted by Anne at 11:41 AM