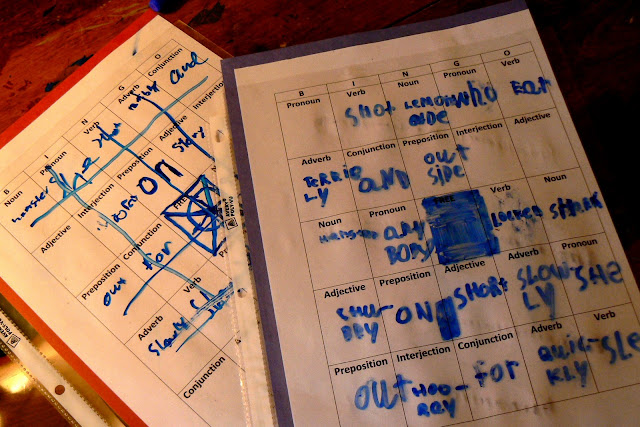 My children have known for a while that there are eight parts of speech (nouns, pronouns, verbs, adverbs, conjunctions, interjections, prepositions, adjectives).  And, they've even learned what each part of speech does (a noun names a person, place, thing, activity, or idea).  Realistically, the next step is to be able to identify the different parts of speech in written work.

Earlier this week, I made up simple Parts of Speech Bingo cards.  I placed the cards in page protectors.  Since there are only eight parts of speech, each part was on a card about three times.  My original plan was just to have a bunch of note cards with different words on them, and as I drew a word out of a bag, my children would write that word on the correct part of speech on their Bingo card.  I planned to get tricky and use words like that because that could be an adjective or a pronoun or yesterday could be a noun or an adverb.  Then my children would need to get strategic on how they used the words on their Bingo cards in order to find all the parts of speech.

It was a simple way to gain a better understanding of the parts of speech.  Plus, my children really enjoyed it.  I think we'll be adding the game into our curriculum several times a week.  Daily, I plan on having my children individually pick a few sentences from a book they're reading and identifying the parts of speech with the Bingo cards.  We'll continue the drill until we master the concept.