I have hinted at a fabulous history class that I have been facilitating, and I'm now eager to share all about it. 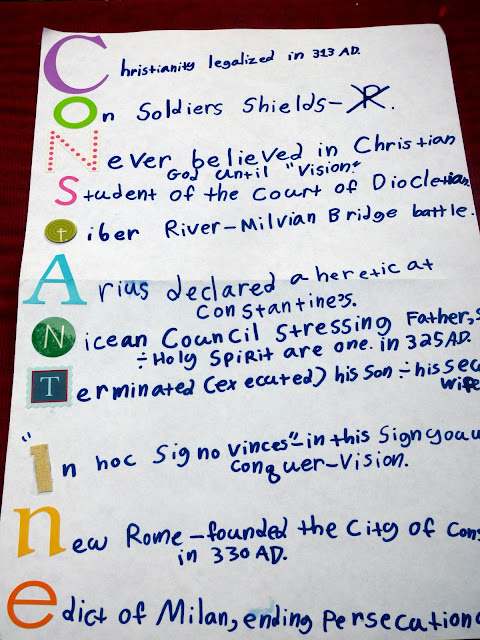 This fall, my children and I made the switch to a new homeschool community.  There have been a few minor adjustments, but overall the transition is going very well.  Last spring, I was approached to teach a Middle Ages World History class for junior/senior high students with a suggested curriculum.  After surveying the curriculum for a few weeks, I went back to the coordinator and said: I will teach the class, but can I use this idea instead?  Fortunately, she said yes.

My suggestion was to not use a text book or curriculum, but instead facilitate a research-based class where the students took much ownership of their work by completing weekly projects.  Each week the students are given an historical person or event to research.  Students use their at-home time to gather information on that topic using multiple sources, preferably living books.  After researching, students then prepare a presentation/project from their findings using whatever creative means necessary to keep them engaged.  THIS has brought me much joy!  In just three weeks, I've seen power point presentations, a recreation of The Edict of Milan, reports, dioramas, a billboard for an Attila the Hun themed hotel, and more!  The twenty students in my class are far more creative than me.

To begin our class, we time-traveled to a period a tad bit before the Middle Ages and researched Roman Emperor Constantine.  My children and I completed several activities for this assignment, mostly so I could have a few examples for the first week of class.  My daughter completed an acrostic poem with facts about the emperor, and my son drew a map of the Battle of Milvian Bridge.  I crafted a Time magazine showing Constantine as 'Man of the Year' in 313 AD.  We also made a shield with the Chi Rho symbol on it [from Constantine's vision prior to the Battle of Milvian Bridge]. 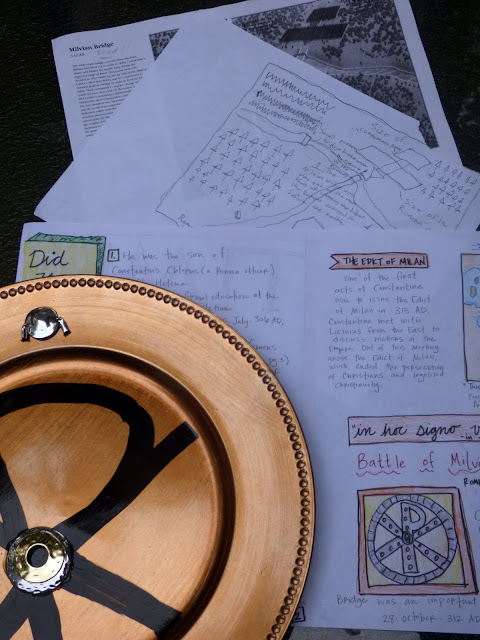 On Wednesday mornings, after the students have entertained each other [and me] with their projects, we complete four different activities.  First, we draw a map of where this event/person occurred/lived/reigned, etc.  [This should not surprise you, if you know me.]  Then we draw a timeline indicating the key events in this person's life, or the major occurrences leading up to and including the historical event.  Third, using tools from The Lost Tools of Writing, along with our weekly research, we write a definition for the person/event.  [My son claims this is the best part of the class.]  Finally, the Middle Ages meet the Modern Age as I have my class write a few hashtags for the person/event in an attempt to identify the common themes and entertainingly remember some of what we've discussed over the past hour.

Our class definition for Constantine reads: Constantine was a 4th century Roman emperor dedicated to uniting the Roman Empire and advocating for the Christian faith.

Our hashtags included;
#legalizeit
#meetmeinnicea
#thenewrome
#upsspecialdelivery [read my recent Daily Learning post to understand the context of this one!]

Learning is such fun!
Posted by Anne at 8:43 PM